Freeport’s copper production increased to 844 million lb, or by 10% compared to Q3. While the North American Q3 copper production remained in line with Q2, the South American operations grew production by 16% and the Indonesian Grasberg mine even by 23%, as the ramp-up of underground operations continues. Although Grasberg’s throughput rates were lower than projected, the feed grades were higher which helped to meet the production targets. The gold production increased to 237,000 toz, or by 24% quarter-over-quarter. Also in this case, the main reason is growing production at the Grasberg mine. The molybdenum production remains around 19 million lb for a third consecutive month.

Freeport’s copper production unit net cash costs declined from $1.47/lb in Q2 to $1.32/lb in Q3. It is the lowest level since Q3 2018. Moreover, the costs should remain at this level also in Q4. Also here, Grasberg helps a lot. The unit net cash costs were only $0.13/lb copper at this mine in Q3.

Along with production volumes, the sales volumes increased too. In Q3, Freeport sold 848 million lb copper (11.7% more than in Q2), 234,000 toz gold (27% more than in Q2), and 20 million lb molybdenum (11% more than in Q2). Moreover, the metals prices improved too. Compared to Q2, the average realized copper and gold prices improved by 18% and 8.7% respectively. Only the molybdenum prices declined by 12.3%. The final effect is a significant growth in revenues. In Q3, Freeport recorded revenues of $3.851 billion, which is 26% more compared to the previous quarter and 22.1% more compared to the same period of last year.

Freeport’s valuation metrics experienced some notable changes over the recent months. The operating cash flows grew quicker than the share price, therefore, the price-to-operating cash flow ratio declined from 19.92 to 14.41. This value is still relatively high when compared to Freeport’s longer-term standards as well as to its peers. Also the ratio of the price-to-revenue reached new highs, at 1.97. What is positive, the operating cash flow-to-net debt ratio increased to 0.19. The TTM P/E ratio can’t be calculated, as the TTM earnings are negative. However, after annualizing the Q3 EPS of $0.22 to $0.88, the P/E ratio equals 20.85. Also this value seems to be relatively high. The possible explanation is quite simple. Freeport’s production volumes and therefore also cashflows and earnings are expected to keep on growing over the coming quarters, as the Grasberg underground ramp-up continues. And a major part of the expected growth is already reflected in the current share price. 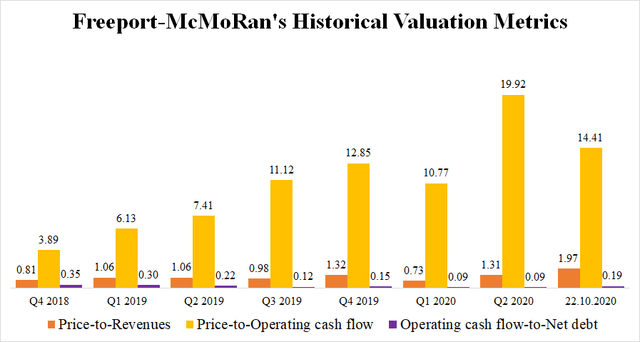 Also Q3 was impacted by COVID-19. The good news is that Freeport’s Cerro Verde mine is returning to full capacity. In Q3, the mine operated at a throughput rate of 351,000 tpd, which represents approximately 90% of the average throughput rate recorded in 2019.

In North America, Freeport completed the Lone Star copper mine that is being ramped-up right now. At full capacity, the mine should be producing around 200,000 lb copper per year. Further 100,000 lb copper should be added by the Chino mine. Freeport is considering its restart at a production rate of 100 million lb per year, starting in 2021.

Another important event that occurred in Q3 is related to Freeport’s debt structure. The company issued new senior notes worth $1.5 billion and bearing an average interest of 4.52% ($650 million – 4.375%; $850 million – 4.625%). While the first tranche of notes matures in 2028, the second one matures in 2030. The proceeds of the offering were used to repurchase the 2022 notes, the 2023 notes, and the 2024 notes. Also this operation increased Freeport’s debt service (the repurchased notes bore interests of 3.55%, 3.875%, and 4.55% respectively), it helped to improve the term structure of the debt significantly.

The 2020 production and cost guidance and the outlook for the coming years remain unchanged. In 2021, 3.85 billion lb copper, 1.4 million toz gold, and 80 million lb molybdenum should be produced. The copper production unit net cash cost should decline to $1.2/lb.

The management has also indicated that after the net debt is reduced to $5 billion, the restoration of dividend payments will be considered. Given the current level of cash flows and their expected growth, this target should be reached by the middle of 2021 (if no major negative events occur). Just a reminder, in 2018 and 2019, the quarterly dividend equaled $0.05 ($0.2 per year). It would equal a dividend yield of approximately 1.1% at the current share price. It isn’t too impressive, however, the CEO stated that “we’re really going to be in a harvesting set of years for the near term“, which may mean that the dividend will be not only reinstated but subsequently also increased. In the not so distant past, between 2012 and 2014, Freeport was paying dividends of $0.3125 per share. 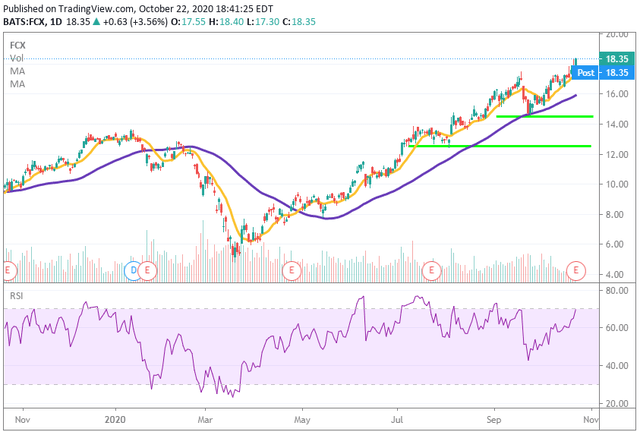 Looking at the chart, it is possible to see a steady growth trend that started back in March. Freeport’s share price has increased by nearly 300% since the lows. The moving averages don’t signal any problems, but the RSI is entering the overbought territory. Moreover, an important psychological barrier is close. If the copper prices remain strong, we will probably get to the $20 level well before the end of this year. However, it is hard to say whether the resistance will hold or whether it will be broken. On the other hand, if the copper prices start showing some weakness, a re-test of the support in the $14.5 area is possible.

Disclosure: I/we have no positions in any stocks mentioned, and no plans to initiate any positions within the next 72 hours. I wrote this article myself, and it expresses my own opinions. I am not receiving compensation for it (other than from Seeking Alpha). I have no business relationship with any company whose stock is mentioned in this article.